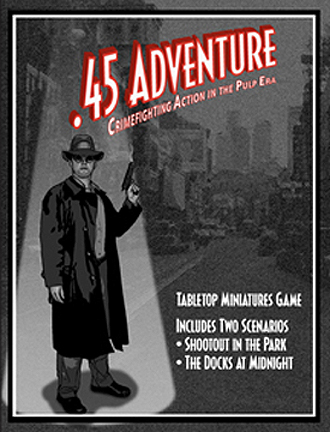 From a company called Rattrap Productions, comes what looks to be a very
cool role-playing game based upon the hardboiled pulps, .45 Detective.

Here's what the company says in brief about the game:

".45 Adventure is a tabletop miniatures game of two-fisted action set
during the era of the pulp magazines. Players can take on the roles of
colorful heroes or unscrupulous villains. With Tommy guns, Heaters, and
Gats they can fight their way through the minions of crime or seek to
control the world.

This book contains all the rules necessary to play, customizable heroes
and villains, rules and ideas for creating scenarios, and two sample
scenarios to help you get started."

I'd like to check it out. Unfortunately, I don't have anybody to play it
with except my dog, but he has paws and can't role dice and he can't
read or speak English. So, could be a problem there.

The basic box with the miniatures and set-up rules goes for a very cheap
$14.95. A helluva deal!