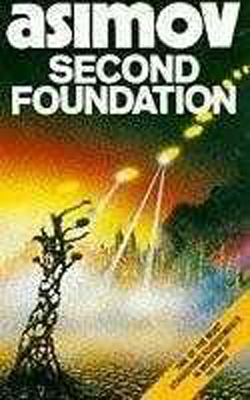 Although this site is devoted to detective fiction, that doesn’t mean
that I started out in that genre. In fact my earliest reading was
Science Fiction, which I read through grade school in the 60s and high-
school and early college in the 70s. Watching Battlestar
Galactica lately got me to thinking about some of the significant
fiction that I had read in the Sci-Fi genre, what you may call part of
the groundwork for my writing across the years.

So I thought I would post some novels which stand out in my mind as
among the best of all time. I should mention that this list cuts off
relatively early — I basically quit reading Sci-Fi about 1980 and
started exploring other genres. So you will find nothing in the way of
new stuff on the list.

This is an incredible trilogy. It pulls you in from the get-go, and the
plot is just so perfectly laid out across the series that I really don’t
think any other Sci-Fi writer ever matched it.

This is actually a collection of short stories. You may wonder why what
with all of Clark’s other excellent work why I picked this one. The
answer is simply that I liked the collection of tales very much.

This is basically a novel that consists of inter-locking short stories.
It is just wonderfully imagined and beautifully written.

This is kind of a strange book — essentially science fiction but with
elements of Hindu mythology thrown in. I thought it was a great read,
definitely out of the mainstream.

This book gave me a new sense of what writing was about. It’s much more
charcter centered than plot centered. My favorite Le Guin is
actually one of her short stories — “The Ones That Walk Away from
Omelas.” I highly recommend that one, it teaches us a very good lesson.

Just an amazing story. That’s pretty much it.

This was the first novel I ever read by this mind-bending author. Let’s
just say I ran through the others very quickly.

9. October the First is Too Late, Fred Hoyle.

This is I think my favorite Sci-Fi book of them all. It has an unusual
view of history — a view that matches my own. Which is perhaps why I
like it so much. Besides, you just have to love a novel in which a 20th
century composer ends up playing a piano duel in Ancient Greece with the
god Apollo who is actually a person from ten-thousand years in the
future.

Besides that, it contains my all-time favorite line from a Sci-Fi novel:
“I might be up against the god himself. But even the gods, I thought,
could learn something from human misery.”

Dune is actually a series, but I will always think of it as an
individual novel unto itself. I read the Successors of Dune, you might
call them, but I really didn’t like them much.

There is no doubt that Dune is a classic, one of the best of all
time. Its almost ecological portrayal of the planet Arakis is the
central thread of the book and pretty much blew everyone away compared
to other Sci-Fi that had been written up to that point. I should mention
too that Dune was rejected by 20 different publishers before it
finally found a taker. Which just goes to show ‘ya

There are a couple of movie versions. The 1984 version has a great cast and this kinda steampunk thing going for it. It also has Alicia Witt as the Bene Gesserit child-witch Alia — just in case you
didn’t notice, a little trivia there. And she’s just downright scary in it.

Alicia Witt as Alia.
“He IS the Kwisatz Haderach!”

6 thoughts on “My Favorite Sci-Fi Novels”