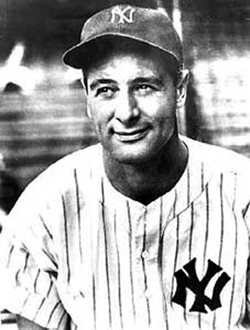 One Yankee who I admire.

The other day I went over to the Coeur d'Alene Casino in Idaho to buy
some cheap cigarettes, which you have to trade your firstborn child for
here in the State of Washington. So I went into the casino and bought a
carton. I then had about two hours before the courtesy van headed back
for Spokane. So I went into the bar there at the casino and sat down and
ordered a beer. They had two nice big plasma televisions there, both
turned to ESPN. A baseball came was in progress — the New York Yankees
versus the Arizona Diamondbacks.

It was frustrating. Here I was, about 3000 miles from New York City and
in the Idaho panhandle and what do I get? — The damn Yankees.

I hate the Yankees. Always have, always will. This in spite of the fact
that the baseball player I respect the most in history, Lou Gehrig, was
a Yankee. And I've even developed a grudging respect for Babe Ruth over
the past decade or so. But those are individual players.

There's a guy I know, let's call him Mike. Mike is a die-hard Seattle
Mariner's fan. He even went to the first Mariner's home game when he was
younger. So me and Mike sometimes (well, most of the time) talk baseball.
We share a certain philosophy about baseball. In a nutshell, the philosophy
is simply "Anybody but the Yankees." If the Yankees were to play a group of
serial-killers from some Federal prison, we would root for the Folsom
Psychopaths over the New York Yankees. That's simply the way it is. Or
course, we usually just root for whatever American League or even National
League team happens to be playing them, not for serial-killers. But you get
the point, I'm sure.

Now my team, the Chicago White Sox, won the AL pennant and the World
Series in 2005. Since then I've kind of been sitting up on the top of a
mountain in a lawn chair sipping beer and looking out over the baseball
universe and saying to myself "Yeah, they won. They won." I can guarantee
you, there's little in life better than that feeling, to have seen your
team go all the way. It's something I will always have with me, so much
so that it doesn't really matter just how badly the White Sox may be doing
in any subsequent year (and this year they're doing badly). Anyway, the point
is that I'm not just some frustrated baseball fan angry that my team sucks so
bad and taking it out on the Yankees.

From a marketing point of view, I can kind of understand why ESPN airs
Yankees games so often. New York and environs is a huge market. I'm sure
it helps revenues to air the Yankees. That is particularly true if they
happen to be playing some team from a nearby market, such as Boston.
But the last time I checked, the Los Angeles metroplex was the biggest
in the United States, and thus the market would be bigger. But you don't
see Dodger's games nearly as often as the Yankees.

So there's more to it than that. I have to be honest, I don't know for
sure why the Yankees are so prominent. But I can speculate.

American's like winners. They like winners and they like to win. The old
saying "It's not whether you win or lose, it's how you play the game" seems
to have disappeared completely from American culture. That is probably never
so true as when it is time for an upcoming Superbowl, where people start
rooting for the favored team who you would swear have never rooted for that
particular team before in their life. They just want to be on the winning
side. They want to be winners by association.

And, let's face it, the Yankees win. Just in the past decade, they have
racked up 4 World Series wins and 5 American League pennants. Pretty
impressive.

But they also throw a lot of money at it. George Steinbrenner is so
well-known for being the guy who is willing to break out his checkbook
and bring in ringers to the team that a tongue-in-cheek television
commercial was made of it. I remember reading a couple years ago that
the salaries of only two star players on the Yankees roster was equal to
the entire team expenditures of the San Francisco Giants.

Thus it's more than an ESPN issue working here. It's an equity issue
that runs like a gold seam though an old-west mine. Some players seem
to get far less than they deserve. And some players seem to get way more
than they deserve. One thing is for sure either way, shelling out the
money can certainly help. Having big stars can't guarantee you a World
Series pennant. But it at least starts you out a lot better, gives you
more to work with.

So I think that part of the ESPN dominance of the Yankees is simply that
they win and people know they win and everybody wants to back the winner.
There's very little of the old-time loyalty left in sports any more, the
kind where you stick with your team through thick and thin.

People would rather watch the Yankees. 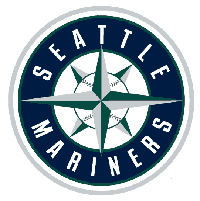