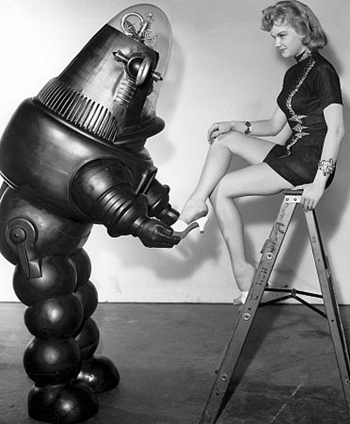 In a deleted scene from Forbidden Planet (1956),
Anne Francis programs the household robot to
be her kinky sex slave.

I had such a good time with Horror Cheesecake that I decided to do a
sequel devoted to the Sci-Fi genre. Interestingly, I found that the
standards of the sci-fi genre were much different (as a whole) than the
horror genre. In sci-fi films, you normally find women portrayed A)
pretty much not at all (2001: A Space Odyssey (1968)); B) in more
"ordinary" or naturalistic roles (The Day the Earth Stood Still
(1951)); being constantly rescued by men (the Star Wars Trilogy,
Spiderman); or, lately, as full-fledged action heroes in their own
right. All of which are much different, really, than the normal brides
of Dracula type roles in the horror genre.

I apologize for the poor quality of some of the photos. There seems to
be a real lack of good movie stills from the sci-fi genre. Which is one
reason it took me three days to compile and edit the photos for this post.

Anyway, here's what came out.

The original and still perhaps the best,
Fay Wray in King Kong (1933) suffers
the misfortune of being the love-interest of
a giant gorilla — who turns out to be a really
nice guy when you get to know him. 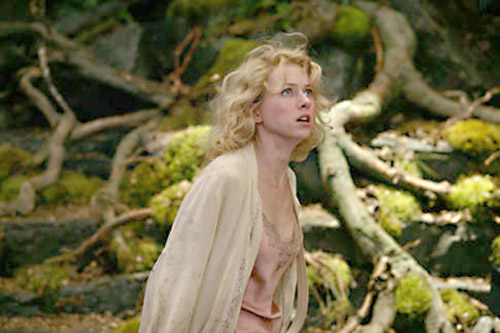 Naomi Watts looking pretty damn sexy for a woman
who has been living in the jungle for a couple of
days in the newest incarnation of King Kong (2005).
And why the hell does she still have that sweater on? 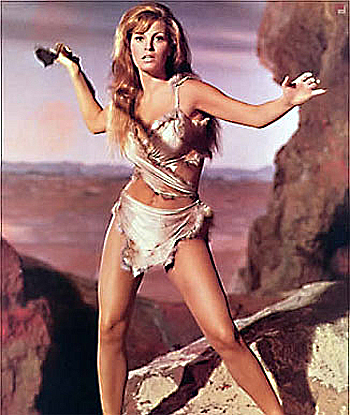 Speaking as an anthropologist, I can state
unequivocally that this is what all women
of the species homo looked like
one million years ago.
They were just HOT. 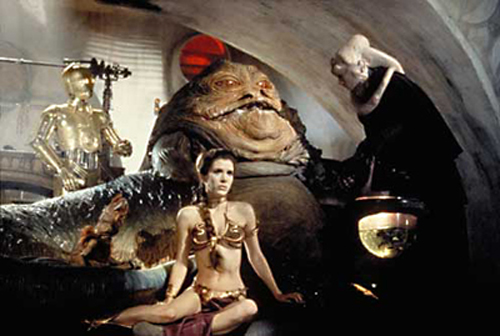 In Return of the Jedi (1983), Carrie
Fisher gets chained up by Jabba the Hut
in some sort of a slave-girl outfit. 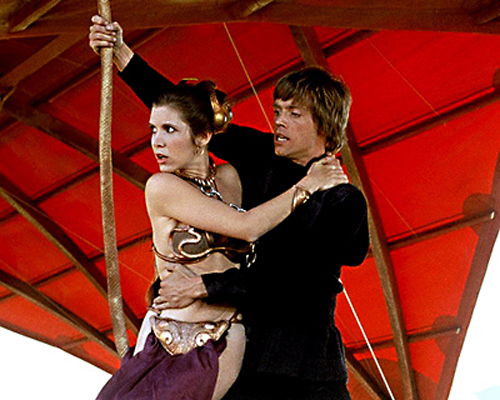 The heroes of the Star Wars trilogy have
plenty of opportunity to rescue Princess
Leia. In fact, they rescue her A LOT. 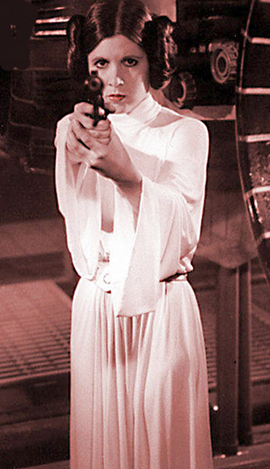 Most of the time Carrie just looks like
a medieval hit-woman. And she does get to
kick a little ass now and then — when she's
not busy being rescued, of course. 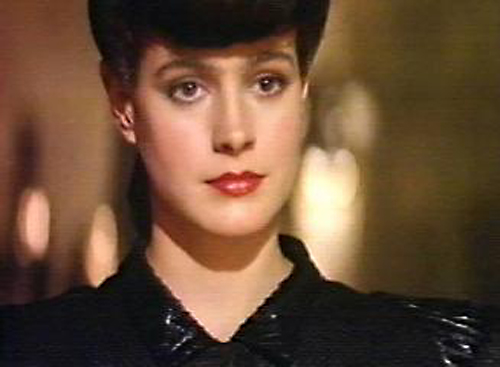 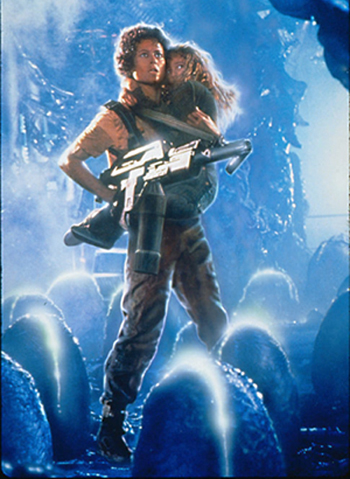 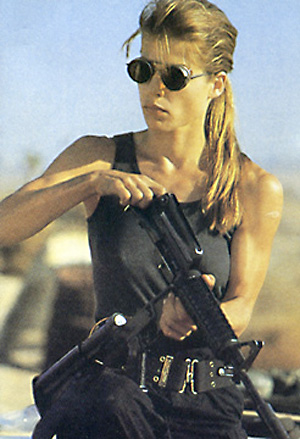 I love this shot of her — so cool, so sexy.
(Those are Matsuda (Japan) sunglasses, by
the way. They are no longer available in that
style unless you can find them used.) 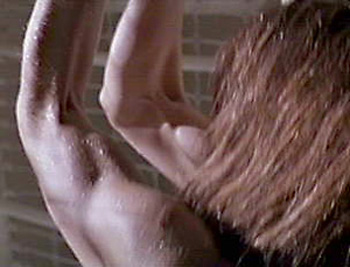 Hamilton develops some pretty impressive
guns while biding her time in the
mental institution.

Later, she holds her psychiatrist
hostage by sticking a hypodermic
full of chlorine bleach at his
jugular. So I guess you can say
she didn't do so well in therapy. 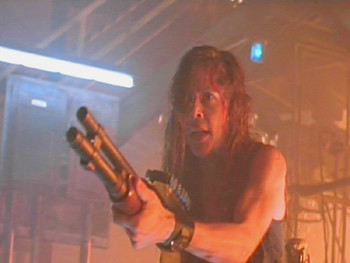 The famous one-hand shotgun pump at the
end of Terminator 2. Perhaps even more
than the Alien series, Hamilton
and this movie forever changed the way
women would be portrayed in action films.
(But see below.) 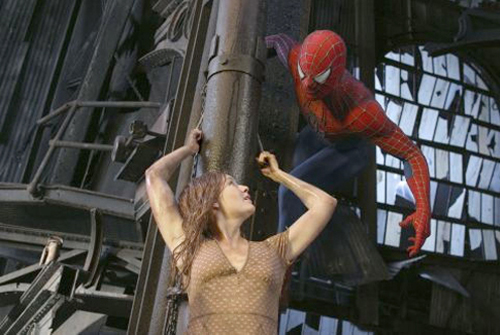 Kirsten Dunst is rescued from the edge of a
building in Spiderman and from the
lair of Doctor Octopus in Spiderman 2.
So I guess we're back to that rescuing stuff. 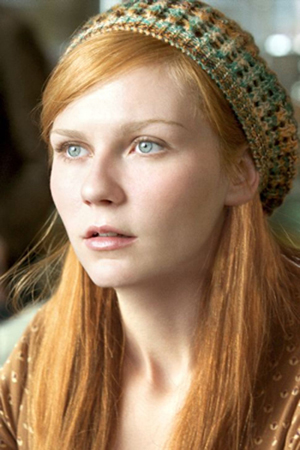 Nevertheless, a beautiful shot of Kirsten
in Spiderman 2. 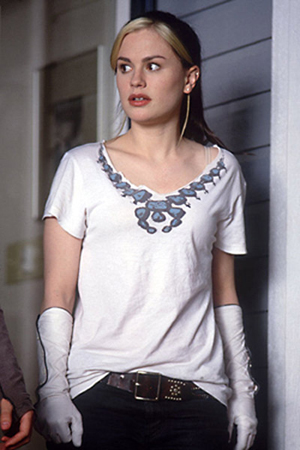 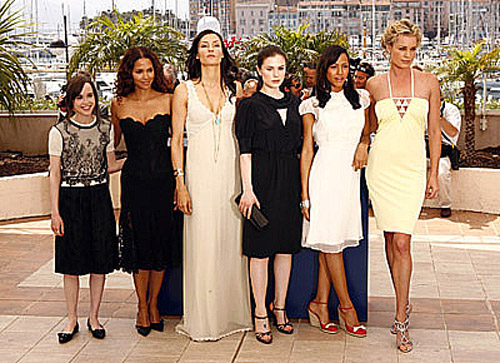 Not that the X-Men series had a shortage
of beautiful women to worry about. 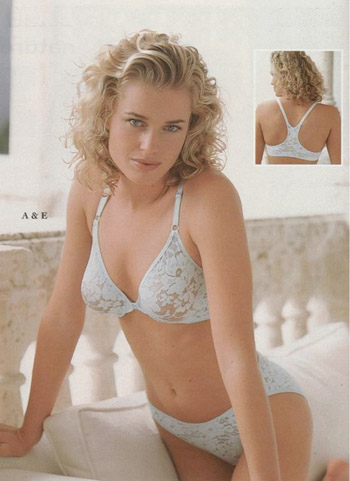 Before the X-Men, Rebecca Romijn used her
mutant powers for good instead of evil by posing
as a lingerie model. 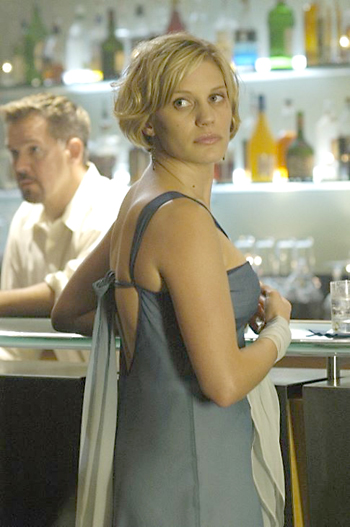 You won't find Katee Sackhoff looking like this
too often in the new Battlestar Galactica series.
She's usually in the cockpit of her Viper kicking
major Cylon butt or in the officer's lounge
belting down the whiskey. 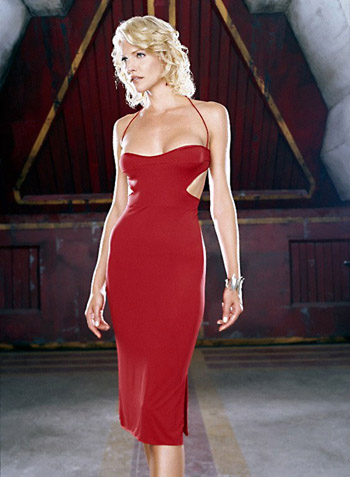 Also from Battlestar Galactica, Tricia Helfer as
Number 6/Caprica wearing the now infamous
red dress. Is she good or is she bad? Time
will tell, no doubt.