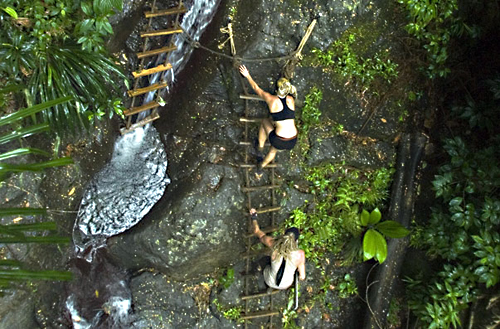 Crew members climb up the side of a falls in Episode #6.

The beginning of Episode #6 of Pirate Master gave viewers what was
certainly the most exciting treasure-hunt to date, with the Black and
Red crews at one point forced to climb a tall rope ladder set against a
waterfall. Having been a spelunker when I was younger and having used
similar equipment I can tell you that rope ladders are hell to climb.

The Black crew claimed the treasure and as a result Captain Azmyth and
his two officers, Jay and Ben, remained in charge of the Picton Castle.
The "Captain Feel-Good" attitude of Captain Azmyth continued to morph into
something more like "Captain Me-First," and when the black marks were given
out and the votes counted Joy was cut adrift.

It was obvious at the start of Episode #7 that the whole crew is getting
pretty tired at this point. The "triad" of Azmyth, Jay and Ben was on
everybody's minds and everybody's lips, with the crew wondering just how
they would manage to unseat the triumvirate before the situation became
impossible to remedy. But the Red crew was unable to beat the Black crew
once again and force a change of power, so the Triad remained. 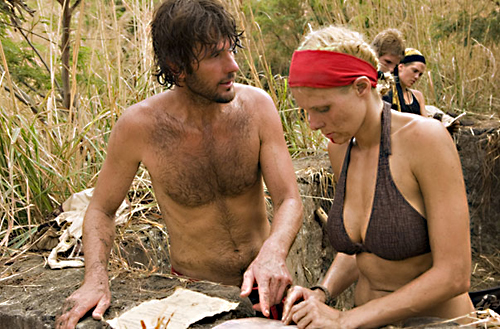 Joe Don and Christa try to figure out
the clues to finding the treasure.

Azmyth and the officers quickly came to the conclusion that Joe Don
represented the greatest threat to their position, and did some pretty
smart maneuvering. They handed the black marks to Nessa, who they
figured would put in the highest bid for the Royal Pardon and thus not
be a factor; and they gave another black spot to Louie, who most everybody
on the ship likes and who they figured wouldn't get voted off. That
would only leave Joe Don — and hopefully he would be the one to go.

Joe Don made a pretty good argument that he was the only real challenge
to the power of the triad, and that the rest of the crew needed him
or they would soon be voted off one by one also. The argument was a good
one and definitely got the crew to thinking but when it came right down
to it, it was Louie or Joe Don, "the father or the warrior", and the
crew voted against Joe Don.

Strangely, everybody on board, even Azmyth who had set the thing up,
seemed saddened as Joe Don was cut adrift. Joe Don had been not only a
strong competitor across the weeks but had been the ship's first captain
as well — a reminder of what were perhaps happier days at a time when
the politics begins to take its toll and the wind-down to the final
eliminations begins.

The Triad asserts its dominance.