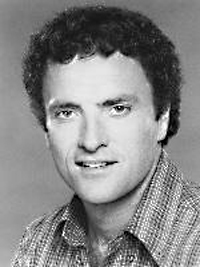 I happened across a movie the other day called Margin for Murder (1981).
The info on the cable tab said that it was a Mike Hammer movie. So I
watched it.

Margin for Murder turned out to be a lot closer to Spillane than
the rather watered-down Hammer series with Stacy Keach. Wrinkled
raincoat and fedora aside, Keach just isn't Mike Hammer. Margin for
Murder gives you the real thing — a screenplay that almost could
have been written by Spillane himself.

The teleplay was by Calvin Clements Jr., whose prior credits included a
wide range of television shows ranging from Gunsmoke to Wonder
Woman. Not very impressive, really; and so it's very surprising to
find here a script of such high quality and faithfulness to the Spillane
stories. According to an IMDB reviewer, Clements was nominated for an
Edgar Award in 1981 for this teleplay. But I wanted to confirm that, and
a database search at the Mystery Writers of America site (who give out
the Edgar's) didn't get me any result either for Clements or Margin
for Murder. So maybe he was nominated and maybe he wasn't. I hate it
when I run into research problems like this, and I apologize to my
readers.

Whether Clements was nominated or not, he certainly wrote an excellent
teleplay. The movie features Kevin Dobson as Mike and Cindy Pickett as
Velda. The more familiar face of Charles Hallahan plays Det. Pat Chambers.
All of the actors do a good job in this, but given the strength of the
teleplay they have a lot to work with and would have had to have been
pretty crappy actors indeed not to have succeeded with this one. Mike
says exactly the things and does exactly the things in this movie that
you would expect him to say or do in a Spillane novel, as do Velda and Pat.

It would be difficult putting Margin for Murder and Kiss Me, Deadly
side by side. Kiss Me, Deadly is not only an excellent translation
of Spillane but is an acknowledged noir classic. Margin for Murder
has none of the sophisticated production values of the former. But it does
give a very dead-on Mike Hammer tale, perhaps more so than Kiss Me, Deadly.
The earlier movie was filmed closer to Spillane's own period, a 1955 version
of a 1952 novel. Margin for Murder is Spillane translated forward three
decades. I would perhaps give an edge to Kiss Me, Deadly between the
two, but both are very good and luckily you don't have to pick one or the
other — you can have the pleasure of watching them both.

Even though Margin for Murder came out in 1981, the producers
seem to have been a little behind the times when it came to filming
this. Most of the clothing and hairstyles are more reflective of 1978
than 1981. Which doesn't affect the story in the slightest, of course.

The set-up is right out of I, The Jury. When a good friend of Hammer's
gets murdered, Hammer swears to find the killer and get revenge. Talking
with his friend's mother, he finds that his friend has left 100K worth of
diamonds, obviously the product of some shady deal. From that point it's
just Hammer interviewing witnesses and making a lot of noise and enemies
until the bad guys jump out of the woodwork. The ending, though, is a bit
more tame than the ending of I, The Jury.

If the movie has one weakness it is in the plot. This was a TV movie,
and like most TV movies back then the plot isn't a very sophisticated
one. It basically just takes you along to the places that you pretty
much expect to go. A real Spillane mystery would have kept you on
the edge a little more.

So taking a little off for the weak plot, I'm going to give this one a
4GU rating. If you like Spillane and want an "authentic" Mike Hammer,
you should definitely check it out.