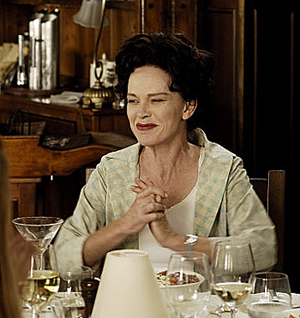 As anyone who has been to this blog lately has perhaps realized, I've
become a little bit obsessed with Judy Davis lately. My last post on
her, talking about A Passage To India and such, was what I thought
would be the last of my Davis posts for a while.

But then yesterday I sat down to lunch and turned on the television and
saw that they were airing Episodes #3 and #4 of the mini-series The
Starter Wife. Well there were only two things that I knew about that
series: First, it stars that girl that used to be on Will and Grace. And
second, it has Judy Davis in it.

So I decided to just watch a bit of it, just to see Judy Davis. Well when
the beautiful Judy finally appears in a scene she is in a hospital and has
a big bandage over her nose and her eyes look like she's been in a kick-
boxing match with Bruce Lee. And her wonderful mouth doesn't look so
good either.

No matter. It's still Judy. So then the show continues on a little and she
gets out of the hospital. But she's still wearing the bandage over her broken
nose. Then there's a scene in which she is reading and has a pair of stylish
glasses on over the bandaged nose, and I have to tell you that really makes
for a strange look.

I didn't watch all of the episode. Having come in what you might call mid-way
there didn't seem to be any point. But I did get to see a bit more Judy Davis,
and as always her acting was great even if she did look a bit beat up. Maybe
some time I'll go back and rent the whole series on DVD. 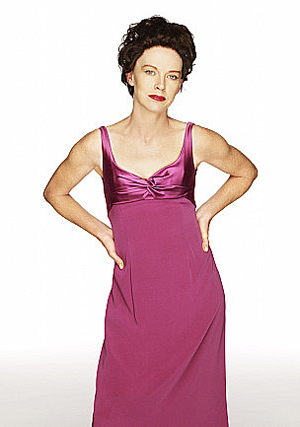 My favorite Australian import.
Even more than Foster's Lager.

2 thoughts on “Even More Judy Davis”