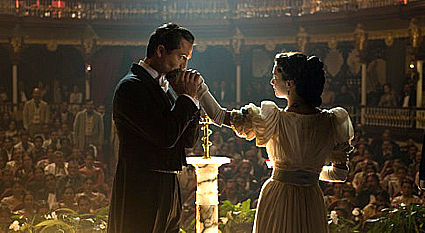 A scene from Love In Time Of Cholera.

I've been looking at movies that are now out or will be out between now
and about Christmas. I just wanted to check things out and see if there
were any new ones that I would care to go see. Only a few really caught my
attention, in terms of paying to go see them.

The first is a movie based on Gabriel Garcia Marquez's book Love In Time
of Cholera. The producers of the movie decided to title the movie Love In
Time of Cholera in spite of the rather downer reference to fatal diseases.
Which is kind of surprising. They could have called it The Woman I Couldn't
Forget or something like that, which would at the very least strike a chord
with pretty much every male out there and quite possibly make it a good
date movie. So I'm pleased to find that they kept Marquez's title.

Anyway, it supposedly is a very good movie. I suppose I would go see it if
there were someone who called me up and suggested it. But that probably
won't happen, so I probably won't see it.

There's another movie coming out called Redaction, which is Brian DePalma's
quilt of stories about soldiers in Iraq. As one commentator said, if you
haven't been sufficiently depressed by the war so far, now is your time
to go out and pay eight bucks and fix that. I don't think I will see this
one right now. But I would bet that it is, at the very least, very intense
— It's DePalma.

Then there's one called Mr. Marjorium's Magic Emporium, with Dustin
Hoffman and Natalie Portman. That one sounds a little bit interesting,
but more for DVD rental somewhere down the line. But as things go with
me and renting DVDs, I doubt I will ever see this one either.

One more in the upcoming crop caught my attention. Johnny Depp is
starring in a movie called Sweeney Todd. This is Stephen Sondheim's
musical, which has been around since 1979. Some brilliant person
decided to release the movie for limited engagement early in December.
Sure, just put out a movie about a serial killer and cannibalism just
before Christmas. So I would expect the movie will disappear entirely
and then pop out on DVD sometime next year without ever really hitting
the theaters much. And I doubt I will ever see it.

Those aren't the only movies coming out in the next few months, of
course. There are a few sci-fi or horror flicks that look totally lame.
And there are a few Big Movies with Big Name Stars which carry plot
lines that, from the sound of it, were made up by a couple people on an
internet chat-room. And there are a few neo-artsy "films" that seem
bleach-pale minor echoes of the past.

Today I just said to hell with all of these new movies and I got on
the internet and bought Jean-Luc Godard's Breathless. I bought
the set that also comes with The Little Soldier and The Soldiers.

Breathless is one of my favorite movies, top 10. The pure creativity
of the movie just blew me away when I first saw it back in the early 80s.
But I haven't seen it since last Spring, when it came on the freebie
on-demand movies on cable. Back then I wasn't feeling too good — rather
"breathless" most of the time myself before I got the new pacemaker —
and at that time the movie just seemed like some saving grace come into
my life. What a study for the creative the movie is. Never mind what you
don't have, never mind if you have hardly anything — take what you do
have, and transform it into something wonderful.

Which was such a refreshing reminder at that tough point in my life.

So when the parcel comes in from Barnes & Noble I'm going to have a
three-night Godard marathon, each night with a tall bottle of Mike's
Hard Lemonade by my side.

Yeah, that sounds one helluva lot better than those other damn movies.

So have a happy holiday movie season, people. I would ask you to join me
for the marathon, if it were possible. 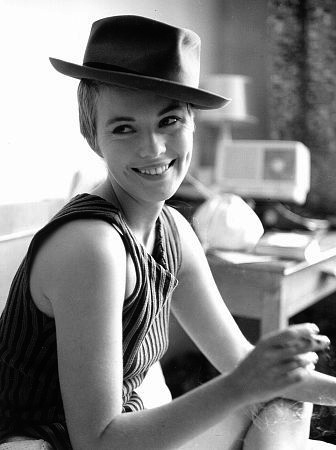