In the early 90s I was living up on the north side of Spokane. Sometimes
I would go out early in the morning and sit on the back step and drink
my coffee. And sometimes I would go out in the early evening and drink
a few beers. One day, as I was sitting on the steps, I heard this quite
unusual bird song. It's difficult to put bird songs into language, so I
can't really describe what it was like very well except to say the song
was very nice — very soothing and poetic somehow.

Not knowing anything about birds, I had no idea what bird it was. I heard
the bird a few more times over the next couple of months, and then it went
away.

Years later, in 1999, I was up on lower South Hill at my friend Julie's
place. I had gone out in the morning to drink coffee on the front porch.
As I sat there I noticed a bird song — the same song that I had heard
back many years prior. I got all excited and went in and told Julie all
about it. I really don't think she understood what all the excitement
was about. A number of days later I heard the bird's song again, this
time in the late afternoon.

At that point, the bird seeming like some strange but mysterious old
acquaintance, I dubbed the bird the Peachy Woo-Woo bird. I don't know
exactly why I called it that. That was just the name that its song
suggested to me and I ran with it.

I haven't heard the Peachy Woo-Woo bird since then. But the other night
I woke up and for some reason started thinking about the Peachy Woo-Woo
bird again. So the next day I got on the internet and decided to see if
I could find the true identity of the bird — i.e. its species.

I checked out various sites that had online bird songs. I eventually
ended up with one that had a fairly lengthily list of bird songs and
calls. It was a laborious process. Having no idea what type of bird the
Peachy Woo-Woo bird was, I had to go through the lists and check out the
bird calls one by one.

And I have to say, I was amazed at all the different types of sounds that
birds can make. Some are very nice. Some seem a tad to the mechanical side.
And though I love nature as much as anybody, I have to admit that some are
just plain irritating or downright hideous. This is especially true when you
are listening to the songs at high volume through headphones. There was one,
the call of the Swainson's Hawk, that sounded like the most chilling, horror-
movie scream that I've ever heard. 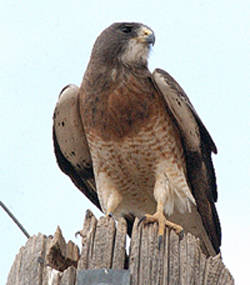 This Swainson's Hawk
is really a screamer.

Going through the lists, I did come across one that I thought might be
the Peachy Woo-Woo bird. The song of the Costa's Hummingbird (Calypte
costae) seemed to me to be very similar. Trouble was, the sample had a
lot of background noise, and the volume of the song was low. This was in
spite of the fact that I was using headphones. There was also the problem
that it had been so many years since I heard the song. And we all know how
memory is sometimes.

I have to admit, I was surprised that it was a hummingbird — if the
bird is in fact the same bird. I never realized that hummingbirds could
sing. Of course, I don't know much about hummingbirds. About the only
things I knew about them is that their wings beat incredibly fast and you
have to have a really fast shutter speed set on your camera to stop the
motion of them. I knew they were tiny birds. And I remembered from a few
photos I had seen that they could have very vivid colors around their
throats.

But in the end, I just don't know. And maybe that's the way it should be.
I write books about a guy who investigates things, who finds things out.
And I am pretty much the same way. But I also think that life should have
some mystery to it also. It is mystery that keeps us questioning, searching,
wondering and filled with wonder at the universe.

So I might never know the answer. But that's okay. To me, it will continue
to be the Peachy Woo-Woo bird.

3 thoughts on “The Peachy Woo-Woo Bird”