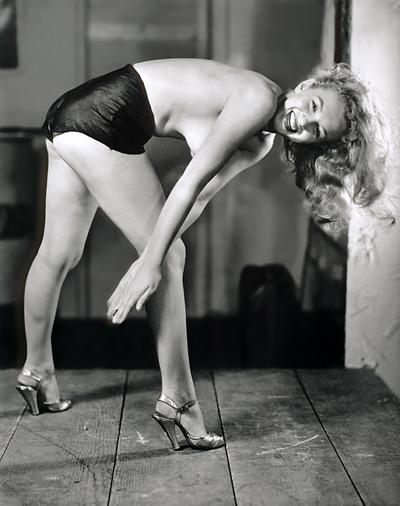 Yesterday I did a post on Marilyn Monroe's
butt.
It was sort of a birthday present to
myself. I had a good number of Comments on
the post, including one featuring a very
jazzy poem by Lokutus Prime on Marilyn's
derriere. Inspired, I couldn't help but
think of a verse in that vein myself. So
as a result Loku most kindly gave me the
poem to do with as I wanted. So, I thought
that the natural result of that would be
to put up the poem with all the verses.
A collaborative effort (I would have said
a "joint" effort, but that might have given
some young people the wrong idea).

I think about Marilyn's butt every five
minutes. So it wasn't any Big Deal for
me to do another post and feature the
poem. But to those who might be a little
weary of hearing about Marilyn's derriere,
I promise this one will be the last for
a good long while.

At least a week.

A RHYME ON MARILYN'S BUTT

marilyn's butt, as I remember,
revived even the smallest ember,
its image blew every tiny flame
and made it leap right up again.
That's why marilyn was quite a dame.

it teased, it tempted, it pulled at them.
it made John Kennedy jump right in.
and when Wilder filmed it at the station
he held 10 seconds to show the Nation.
and when they made Misfits, or so they say,
it tempted even Montgomery Cliff — and he was gay.

there are butts that don't do that,
they send out messages "shoo – go, scat!"
marilyn's butt was very cute,
it never wanted eyes to scoot,
it purred and wiggled, seemed to say,
"hello boys – you going my way?"

If you really would care about who wrote
what on that (as if my weaker verse isn't
obvious) you can go to the Comments of
the previous post.