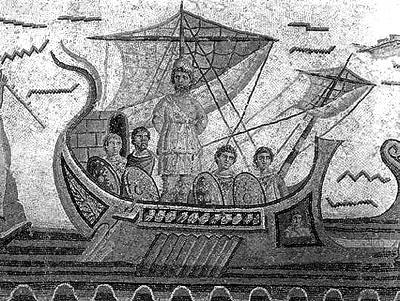 Allan’s comment on a recent post about the lyrics to Glen Campbell’s
song “Galveston” for some reason got me to thinking about another who
had been separated from his native land — Odysseus. And that in turn
got me to thinking about a short poem I wrote a few years back, in
January of 2006 in fact, on a theme suggested by Book XI of The Odyssey.
So I decided to try to find it on my computer. And I did, and after
reading through it, and having little else to post today, I decided
to put it up.

The first line is pretty much Homer’s — “and all the roads of the
world grew dark.” And then there is the indirect reference to the
Agamemnon line. The rest is mine.

THE LAND OF THE HOUSE OF THE DEAD

And all the roads of the world turned dark,
a cold wind cut through our bones,
Persephone’s wind…
Black ship through black water,
with only the sound of the sea’s churning.

And around me the sailors slept, or
kept each other awake for the watch.
Phideus, next to me, shifted and whispered,
saying to me, and to himself,
“I have a wife in Iton.
I think she is no longer young.”

And to Odysseus came a strange dream.
Startled, his head snapped
and he came wide awake.
“It has been too long since Ithaca,
too long since joy.
Something within has died.
Though I know not what it is.”

This voyage, this endless voyage
from Pheastos to Illium and after:
half an eternity; and then another eternity.
“How long will it be till I find home –
and where is home?” he whispered.
“After this voyage, all is foreign.”

I do not know the path
or the end of the path;
I believe, but belief does not necessitate
hope. And then the difficult passage, and
the one thereafter.
I do not know my end
and it has been too long since my beginning.

And how to rouse myself again this day?
How to justify myself in my own eye?
I pray to the gods, and thank them;
for one should always remember the gods.
Forget all else for a moment, and try to sing,
remembering Orpheus.

Today, standing perfectly still
in the stern of the ship,
I saw some kind of birds unknown to me fly overhead;
and in their color and motion
they were perfect,
deep gray, and about the throat and chest
pure silver; flitting quickly here and there
and in a moment they, and even I,
rose upward.

But is it not on this voyage, voyager,
that you may realize yourself?
How else to grow, as Agamemnon’s man said,
except to stretch the dreams amidst the night’s
harsh chill?
And the waters rushed past the ship.

And then we sailed up
to the Island of Souls.
For to come home,
Circe told us, we must face the bleak cold,
and the faces of the dead.

Our bones aching from the chill
and arms from the endless rowing,
we came upon that great desolate place.

And we made sacrifice there.
The ram’s eyes rolled up in its head,
and we felt then, there on that shore,
that we knew for the first time
what it was for a thing to die.

Then the ram’s terror was suddenly our own
as the pale, translucent ghosts moved towards us
from a mansion of alabaster
and the House of the Dead.

And each man sank to his knees,
trembling at the procession
of that cold horrible horde.

But then Odysseus, quick as a ram,
jumped up on the prow of the black ship,
and bolstered us
in that age of terror, saying:
“Without the dread of the dark passage
there would be no brave men.”

45 thoughts on “The Land of the House of the Dead”