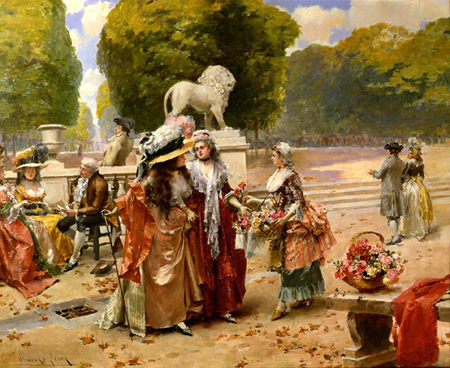 Continuing with some bee I've gotten in my bonnet with Paris in the
18th century.

The Tuileries in Paris (Jardin des Tuileries) is a garden that once
formed an extension of the Tuileries Palace, destroyed by fire during
the Paris Commune revolution of 1871 and finally leveled in 1883. It was
designed by architect Andre Le Notre in 1664 during the reign of Louis
XIV and comprises some 63 acres, or roughly one-thirteenth the area of
Central Park in New York City. With the old palace missing it today
forms more of an extension of The Louvre.

Source: This nice site, and of course Wikipedia.