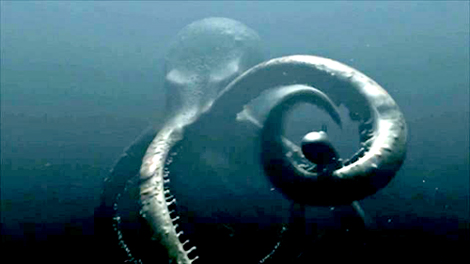 The other night I stretched out on the couch and turned on the Sci-Fi
Channel on television and watched Mega Shark vs. Giant Octopus (2009).
The set-up is typical for this type of movie: Something really stupid
we humans do awakens a couple of havoc-wreaking sea creatures from
far back in geologic time — a giant shark and a giant octopus. The
shark is about the size of an aircraft carrier and the octopus is as
big as Mt. Ranier. Oh and I should say too that the two were/are deadly
enemies. Before you know it all hell breaks loose, as hell always seems
to do. The giant shark eats the Golden Gate Bridge and a U.S. Navy missile
cruiser; meanwhile, the giant octopus takes out an off-shore oil rig and
a passenger plane and a few whales. The Japanese and U.S. governments of
course don't want the public to find out about the shark and the octopus
and starting a panic. So they keep everything a secret and send the Navy
in to try and kill the shark and the octopus.

One of the first to get wise to what is happening is a marine biologist
named Emma. Together with an Irish biologist and a Japanese scientist
they discover what is going on. The governments don't want them causing
any problems of course. But when they are unsuccessful at destroying
the creatures they pretty much forcibly recruit Emma and the others to
help them. The scientists are saddened that such a great research
opportunity will be lost. But eventually even they realize that the two
gigantic creatures aren't exactly fitting into the contemporary
ecosystem and will have to be put down. They come up with a plan to
lure the two creatures together, upon which the shark and octopus fight
a mighty battle against each other and are destroyed. And then the
world can get back to normal. Unfortunately.

Pretty much from the get-go it occurred to me that the actress who played
Emma looked very familiar. But I couldn't figure out where I had seen
her before. So I got onto Internet Movie Database and found out her
name was Deborah Gibson. Well that wasn't much help really, so I dug a
little deeper (it's nice being able to do this stuff on the Blackberry
while watching television) and discovered that Deborah Gibson was in
fact Debbie Gibson — the famous 80s pop star. If you are too young to
remember her, Gibson was sort of the progenitor of teen singers like
Britney Spears and Miley Cyrus.

Since the 80s Gibson has continued to put out the occasional album and
has made a few movies besides Shark vs. Octopus. She also did an 8-page
photo spread for Playboy back in 2005 at the age of 34. So if there's
anybody out there who lusted after Debbie back in the 80s but was nervous
about the Jail Bait Mind Police as you tossed and turned in bed, it's
okay to lust after her now. Seriously, it really is. It's okay.

After Shark vs. Octopus I started watching Spring Break Shark Attack (2005).
But by that time I was on my third movie in a row where sharks go around
eating people, having seen one the night before that also, and was kind of
tired of it. So I turned off the television and went to bed. 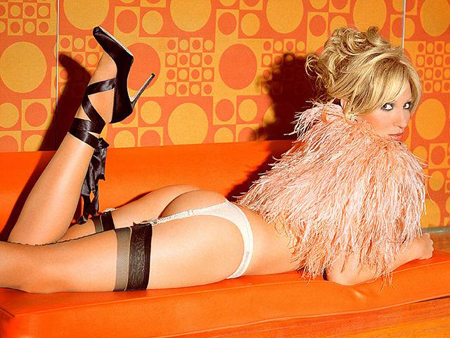