There's not a lot to report today in that right now
we are in an interlude where there is a lot of team
competition, such as Hockey and Curling. I will cover
those when actual medals are awarded. 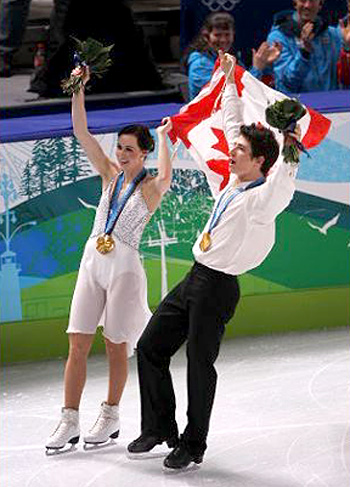 The ice dancing team of Virtue and Moir took Gold
last night, completing the 3rd and last portion of
the Ice Dancing competition. They are not only the
first Canadians to win Gold in ice dancing, but the
first from North America.

Incidently, it should have occurred to me long before
this, but ice dancing is the only area of ice skating
which allows vocal music — regular ice skating must
use purely instrumental music.

The Women's Short Program event will be held tonight.

It's all about the pants.

"It's crazy. We were on the front page of one of the
major newspapers back home and it said the King of
Norway may be coming to our game on Tuesday when we
play Great Britain and a reporter asked him if he
would wear the pants. And the King of Norway said,
'Yeah, sure, I love those pants'. I mean, we could
hang out with the King of Norway and give him some
pants. It's just crazy. We definitely have a pair
of pants we can give him."

17 thoughts on “The Olympics: Team Time”