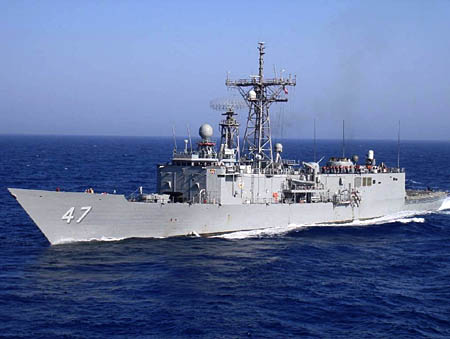 The other night a small band of Somali pirates attacked the U.S.S.
Nicholas (FFG-47) in the Indian Ocean. You gotta wonder what's going
through the heads of these pirates. I mean, if I were a pirate the last
vessel I would think of attacking with my little speedboat would be a
U.S. Navy guided missile frigate. I guess the pirates didn't learn their
lesson when they unsuccessfully attacked a Dutch destroyer a few days
earlier or after a bad run-in with the USS Farragut (DDG 99).

In any case, the crew of the U.S.S. Nicholas captured the pirates and
also commandeered their mother ship. The question now is what to do
with them. I suppose they could put them on trial before a court in some
country or another. But to me that doesn't sound like a very piratey way
to do things.

So here are some possibilities as to what to do with the pirates.

So what do you think?

Your vote is needed! Please vote!

Incidentally, the U.S.S. Nicholas was voted a while back the best ship
in the Atlantic fleet. So congratulations to its crew.