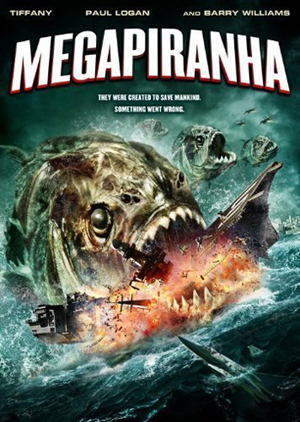 Last night I watched the premier of Mega Piranha (2010) on the SyFy
Channel. There had been stuff all over the internet about the movie
weeks in advance, with the general consensus being that Mega Piranha
might just outdo other SyFy Channel original movies in terms of pure
stupidity. So of course the Movies So Bad They Are Good lovers were
really looking forward to this one as (possibly) the event of the year.
Or at least of the season. And of course I was among them.

The set up is typical for a creature-feature movie these days: Something
really stupid we humans do (usually with the best of motives) goes
horribly wrong. The movie starts out with a U.S. special ops guy named
Fitch being sent down to the Orinoco River of Venezuela to find out what
happened to a State Department guy who was killed while boating on the
river. The powers-that-be (whoever they are) want to know if the envoy
was killed by terrorists or some other agency. Once Fitch gets down there
though he determines that the boat was attacked by larger than normal
piranha. This is mainly because while diving the wreck he is himself
attacked by larger than normal piranha. Seeking information he goes to
the American research lab which is doing experiments in the area on fish
to find out if there is some connection. You know, just on a hunch, in case
mutant piranha could possibly have a connection with genetic experiments
being performed on fish at the research lab.

The lab is headed by Sarah Monroe. She and her staff grow both extremely
excited and also very much worried when they hear that there are now
giant piranha in the Orinoco River. (I should mention here that every
time the Orinoco River was mentioned in the movie I kept putting Enya's
"Orinoco Flow" in as background music.) Anyway, the team informs Fitch
that the piranhas will continue to breed and will grow in size exponentially
and that something has to be done.

The first idea is to let the fish stay trapped behind a sand bar and siphon
out the water to drown them. Unfortunately before they can do that things
go awry. The piranhas are attacked by helicopters by a Venezuelan army
Colonel who for unclear reasons has been riding Fitch's ass ever since
Fitch arrived in the country (I think it has something to do with Fitch
being an American — gee, go figure that one). The piranhas survive the
attack. More, the attack eliminated the sand bar and they are now headed
downriver.

I think I'll stop with the whole plot thing right here so as to not spoil
the movie for anybody. But let's just say that there are numerous totally
screwed up attempts to kill all the piranha before they reach Florida. And
of course it's Florida. Even though Cuba would seem more in the path if they
just happened to be heading North. But never mind that, it seems the fish
want to visit Florida.

The highlight of the movie for me was the scene where Dr. Monroe goes
off on a minute-long completely panicked rant about the whole terrible
piranha situation. It's not exactly a good sign when the scientist that
created the piranhas and who knows the most about them starts to lose
her mind. It doesn't inspire much confidence about the whole situation.

But in general there isn't much of the crazy and hilarious dialog that
is found in other, similar movies. The makers of Mega Piranha seem
to have decided to put the emphasis on the action. And so if you want
to talk about crazy action, then there's a lot to talk about. Besides your
usual giant killer fish attacking boats and helicopters and submarines
type thing (the attack on the submarine seems to echo a similar one in
Mega Shark vs. Giant Octopus) you also have some helicopter combat, a
fairly good car chase scene, scuba-diving, and the use of completely
fictional high-tech weapons and tactical nuclear weapons. There is even
some human vs. piranha martial arts stuff — and of course just as in
the kung fu movies the piranhas attack one by one instead of all at the
same time.

The most ridiculous idea of the movie though has to be the fact that
while the piranhas are never quite away from the water they do show a
marked tendency to leap out of the water to eat people and buildings and
such. I have to admit, there's nothing quite as exiting as seeing a piranha
the size of a school bus leap out of the water to attack a building. Next
to that Shamu jumping through the hoops at Sea World pales by comparison.
But you kinda have to wonder too: Are these fish suicidal for some reason?
Perhaps they are extremely depressed. Because the jumping out of the water
thing would seem to go against the survival instinct. Well, like the scientists
do many places in the movie I guess we'll just chalk that one up to the whole
"feeding frenzy" thing and leave the suicide theory to the people who know
something about it. In fact, it seems to me that existential ichthyology
is a relatively untapped field.

Mega Piranha is in its own category. While there may be parallels with
other insane creature flicks of recent years, I think it goes its own way.
Everything about the movie seems to have been planned in advance to be
completely over-the-top. I think that the SyFy Channel is beginning to
get with the spirit of the thing.