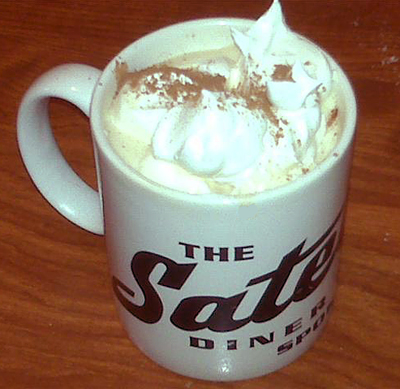 Coffee originated in Africa and its use as a beverage then spread first
to the Middle East and then into Europe. By the late 17th century there
were coffee houses in many European cities. In London the coffee houses
became rather a cultural phenomenon in their day, a place for artists,
intellectuals and others to get together to socialize and exchange ideas.
The coffee shops were pretty much interchangeable with chocolate houses
(chocolate being another new imported product), and the tendency was
pretty much universal to combine coffee with sweets such as pastry.
Somehow, everybody has agreed then and since, the two fit together.

Today of course there are coffee houses on virtually every block in the
United States. And to a certain extent the establishments (with the
exception of quick drive-thru expresso stands) have something of their
old character.

This morning I got a craving for old-style coffee. Thinking of the historical
coffee culture of Vienna I made a type of kaffee schlagobers. Using very
strong-brewed coffee I sprinkled a little cinnamon into it, added a couple
of whopping tablespoons of whipped cream to the top, then sprinkled a little
more cinnamon into the cream. I hadn't had coffee of that type since the 70s.
So it was a real treat.

And of course you can't drink kaffee schlagobers without listening to Mozart.
In fact I think there's some sort of law to that effect.