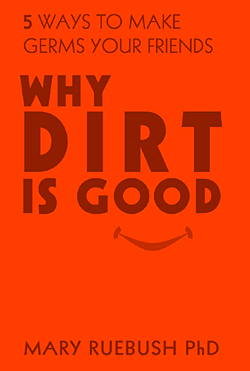 On a previous post I jokingly talked about the econ-
omic and business uses of dirt, which is used for
construction and in our home gardens. That type of
dirt is what you might call "good dirt." In this post
I would like to talk about "bad dirt" — the dirt
that we are always trying to get rid of.

Normally when we talk about dirt it is "bad dirt."
We say that our clothes are "dirty", we talk about
a pornographer as a purveyor of "dirt", and we say
that someone has got the "dirt" on someone. And of
course we try to keep our homes clean and free of
dirt — "dirty dishes."

We usually don't think about it much: It's dirt —
get rid of it.

In Why Dirt Is Good, immunologist Mary Ruebush
supports her thesis that obsessive cleanliness and the
use of cleaning products is actually bad for young
people in that they prevent the building up of healthy
immune systems. And it seems that since the book was
first published in 2009 many in the medical community
have come to agree with that view [USC Health Magazine;
January 2000].

Looking at it from a common sense type of way in my
own field, I would say that it would be very difficult
to reduce a child's immune system by way of "protective"
cleaners inasmuch as a young person does not spend all
their time in their own home, but also attends school
and probably spends time in the homes of other children.
Nevertheless I think Nuebush's overall point is a good
one: We can't protect our children by putting then into
some sort of a bubble. As much as we humans may forget
or even deny the fact, we are a part of our environment
and cannot escape it. And as much as we like to think
so sometimes, we can't create a perfect world. 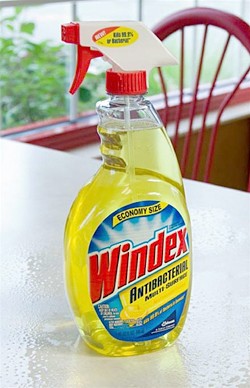 A lot has been made since the Swine Flu crisis of washing
the hands when out in public. I have to admit that I have
taken to rather obsessive hand washing myself since a
recent bout of bronchial pneumonia. And it is recommended
by doctors that washing the hands in public situations
is a good idea. But let's face it, even that one has its
limitations: It doesn't eliminate the fact that as soon
as hands are washed in a restroom that we touch the door
handle or the next table we run into, the next magazine,
the next elevator button or counter pen. Nevertheless my
own opinion is that trying to avoid germs is at least
better than doing nothing. And unlike antiseptic cleaners
in the home, doing so doesn't seem to have any bad effect
— except perhaps for dry skin if washed too often.

These days also we have antimicrobial air conditioners and
air filters as well. These are designed to keep microbes and
pollen out of the interior atmosphere of a space. I would
imagine that these could have the same overall negative
affect on young people that the antiseptic cleaners do —
although in this case I would have to add that for people,
young or adult, who suffer from allergies or who have asthma
or some other respiratory problem that such conditioners
and filters could have a very positive benefit.

If we humans had eyes that were as powerful as microscopes
and by which we could see into all the hidden nooks and
cracks of our world and see the tiny life forms which live
with us constantly, I imagine that for most of us it would
be very unpleasant to think about. In fact if you want to
torture yourself I'm sure there are photos out there on
the internet that would allow you to see that type of thing.

But it's not some horrible science-fiction world that we
live in. It's just our world, our ordinary dirty world.