My mom's bed has been falling down lately due to the
fact that the metal side frame kept edging out from the
bottom slats, which then would fall and cause the mattress
to collapse onto the floor. I had tried working on it before
by tightening all the bolts, but they were all pretty much
stripped. So yesterday me and my sister took a trip up to
the Lowe's Home Supply on North Division to get some new
bolts. We had a nice day for it — cool and at least at
that point not too sunny. 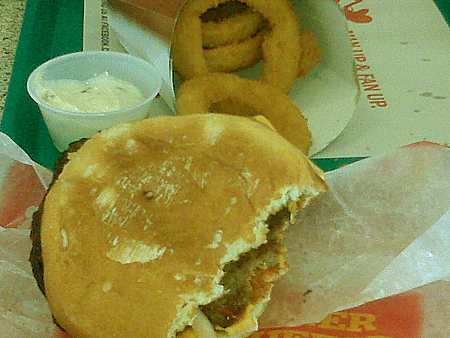 Right off the bat my sister got hungry. So we stopped
at the Carl's Jr. burger place across from Lowe's and
ate lunch. I was going to save this photo for my upcoming
crappy but tasty food post, but decided that compared
to what I am going to do on that one that Carl's Jr.
is actually a bit too "upscale."

When we finally got to Lowe's we went through tons of
various screws, nuts and bolts, etc. My sister, who used
to be in the building supply trade, finally found the
exact size and gauge we were looking for. After that we
looked at carpets, as I want to replace my old rug in the
living room which is now 14 years old and in not too good
of shape. I didn't find any that were a perfect stylistic
match to my walls and furniture, but I did find one that
was cheap and might be acceptable. But that will have to
come some months up the road.

Once home we rested a bit and then took the mattresses
off the bed and took the old bolts out of the frame and
put in the new ones. My old collet screwdriver kept
screwing up and I put a new one on my Christmas wish-list.
I don't use it all that often, but that's the kind of thing
you have to have when you need it. I also had to keep
changing out the screwdriver tip, as the old bolts had
hexagonal heads and the new ones had Phillips heads.

It got to be 4:58 at that point and for a minute we
considered leaving everything a mess until the next
day and going to get a beer like real construction
guys do. But then we thought, nah, we're not getting
paid for this so let's just finish it. It took about an
hour to complete the project. Our legs afterward were
very sore from squatting.

28 thoughts on “Nuts and Bolts. Literally.”