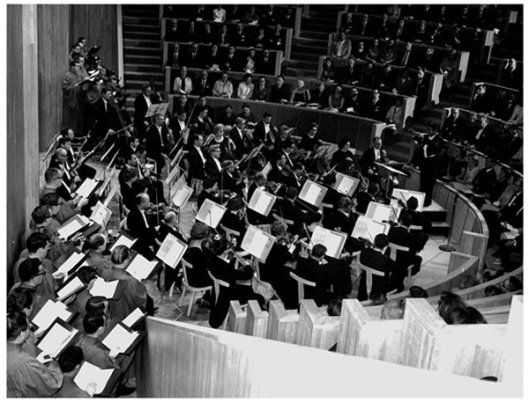 Well I had a funny feeling this was the case back
when I wrote my short story "Winter Skies" last November.
But I was only able to confirm it this morning.

I don't even know what to say. Grief — I have to
learn not to clutch so much, but it is difficult
in this case.

"Olive M. Rhodes Died on September 1, 2008. She was born in Milwaukee, WI
on May 27, 1914. She studied music at Wisconsin State Teachers College,
majoring in violin. She conducted the Cudahy, WI High School band for
four years in the early 1940s. She had a great relationship with her
students and for many years has kept in touch with "her kids," now
mostly grandparents. She also went to Northwestern University Music
School, where she studied with David Moll, violinist in the Chicago
Symphony. In 1945 she joined the Indianapolis Symphony, where she met
George Rhodes, a trombonist. They were married in 1950. She performed
with the I.S.O until their retirement in 1982. During some of those
years she studied with Mischa Mischakof, concertmaster with the N.B.C.
Orchestra and the Detroit Symphony, and with David Dawson at the I.U.
School of Music. She taught violin at Butler University. After retiring
in 1982 she and George enjoyed ballroom dancing and took many trips in
Europe, Africa, and the Pacific. They spent 20 years taking canoe trips
in the Boundary Waters Wilderness Area of Northern Minnesota and Canada,
and then spent 27 more summer vacations in a cabin at Golden Eagle Lodge
on Flour Lake in northern Minnesota, where they canoed and hiked daily,
and made many good friends. Olive will be remembered by George and her
many friends for her friendly, fun loving personality, and for her fine
musicianship."