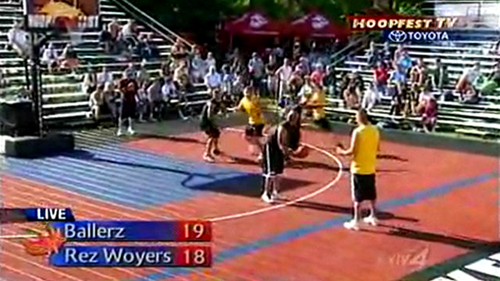 Well this weekend is Hoopfest, one of Spokane's four
yearly BFDs. It is billed as the largest 3-on-3 basketball
tournament in the U.S. And it probably is, given it
comprises almost 7,000 teams and 14,000 games, played
on hundreds of improvised courts in the downtown area.
It will last until Sunday night, when it will all come
down to four teams — two each in the Men's and Women's
brackets — battling it out on center court.

For the time being, you can check out some of the
action here. They do have very brief breaks between
games so if you hit one of those stop back a few
minutes later.

After Sunday though you will probably just get a
Department of Transportation traffic webcam. :p