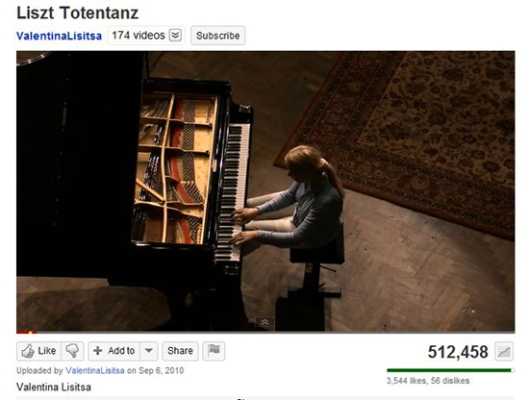 I noticed today that Valentina Lisitsa's performance of
Liszt's Totentanz on youTube has now received over half
a million listens.

Of course that's not enough; I think it should be up more
around 50,000,000 listens. But I am hopeful for the future.
As for the comment I left her on this performance it is, as
of the time of this writing, now back to page 62. And I am
happy for that. But if you would like to know what I said
about it without going through all those pages, here's what
I wrote:

"Simply put, the greatest pianistic performance I have ever
seen/heard. I hate to be dramatic but it is true, this is
just mind-blowing."

And it is still mind-blowing. I took off the headphones
this morning after listening to it and felt that 90 percent
of my brain cells had been re-arranged. And in fact it
might have been higher if the other 10 percent of the cells
were not immediately involved in the control of bodily
functions.

And then of course there is what it does to my heart and
my soul. But that is much more difficult to explain.

One thing I can say about this performance also is that
it was taped back in 2008. That's three years ago. Given
that we are talking about a pianist who when not traveling
practices 12 hours a day, and given that it has been 3
years since then, well, I leave it up to your imagination.
But you really don't have to imagine it. You can check out
her video of the first movement of the Rachmaninoff Sonata
No. 1 and find out for yourself where she is at now. My
personal opinion is that in that interval she has grown
greatly in musical maturity.

Listening to her Chopin Etudes today is like night and day
for me. "The little things tell" as the saying goes. Besides
her technique and interpretation, she seems since the Chopin
to sit at the piano a bit differently, use her fingers in ways
that I've never quite seen before, and most of all perhaps
there is the expression on her face — much more intense,
focused, almost the face of an Olympic diver stepping across
the board rather than that of a pianist. All of that can be
seen in the Totentanz video. And with the passage of time I
think it has become even more noticeable. And all of that
intense practice has given her incredible stamina also, the
stamina she has used for some pretty grueling recitals.

Long gone, I think, are the days of "plays like an angel."
This pianist is a demon awakened by the ghost of Franz Liszt.

Anyway, it occurred to me that although I had linked her
youTube video of this piece in one of my Comments, that
I had never linked it on a post itself.

And so, in true service to my Queen, here it is.