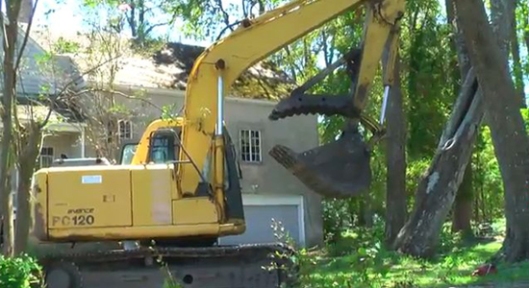 I hope my readers will forgive me doing two back-
to-back posts on Valentina Lisitsa. But her release
of a new group of videos has given me a lot to talk
about.

Among the new videos is one featuring her
playing the same Liszt Ballade she performed at the
Beethovenhaus recital. And it also uses the one of the
same candelabra used in her Schwanengesang DVD a
number of years back. But in this case the candelabra
is more than mood-enhancing: Because this particular
video was shot last August during Hurricane Irene, with
the storm blowing through her area not too far inland in
North Carolina. As Valentina writes, "Here the candelabra
is not for decorative purposes only. It serves as and old-
fashioned but reliable source of light — the only solace
when there is no electricity, water, phone, internet, TV,
air conditioning — all modern conveniences we take for
granted." (I take it that in the video scenes that were
shot she was running on the camera's batteries.) Her
family having gone off further West to Durnham and safety,
Valentina stayed behind and sat through the storm alone
in order to take care of her "animal family" and to
practice.

Evidently the nearby Neuse River was so deluged with
water that it flooded its banks and came near to
reaching Valentina's house. Trees were felled by the
forceful winds and one old oak came close to falling on
her roof. Moving also was Valentina's description of the
aftermath of the storm: Orphaned baby birds hopped around
trying to find food. Butterflies and hummingbirds came to
her yard to pick amongst remaining vegetation. "Later on
I had to improvise by making fake flowers from craft foam
and soaking them in sugar syrup to keep with a demand."

And so the Queen has survived the Tempest. Come
unto these yellow sands, and then take hands, court'sied
when you have, and kiss'd, the wild waves whist.

6 thoughts on “Playing Through the Storm”