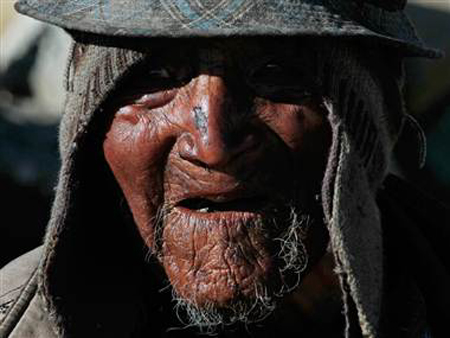 Carmelo Flores Laura, a Bolivian man who may be
the world's oldest human at age 123.

Fifty years ago if a person had a heart attack their chances of surviving
it were far less than they are today. A recent British study shows that
while in 1970 only one-third of heart attack victims survived, that
today the chances are in the range of sixty-nine percent. That is double
the survival rate. And if one were to go back to what existed in 1955,
the increase has surely been even more significant.

There are probably several reasons for this. In decades past if a person
had a coronary an emergency call had to be placed on a nearby telephone,
which may or may not have been nearby. Today, with cell phones, it is
almost impossible to get away from a telephone. If a person has an
attack on a city street, or on a construction site, there is most likely
a person with a cell nearby. But while rate of response may be a factor,
the main reason is of course that there have been advances in medical
science. If a person makes it to a hospital there is simply more that
can be done both surgically and non-surgically.

As with heart disease, new ways have been developed over the years of
dealing with many diseases and medical problems in general. Extrapolating
upon what has been done in the past decades suggest that medical science
will continue to extend both the quality and quality of life. And besides
procedures, new methods of testing and an strong view toward preventative
methods have and will continue to influence life expectancy.

As a result the average life expectancy here in the U.S. has gone from
about 70 years in 1955 up to around 78 years in 2005. That is an increase
of about 9 percent over just 50 years. Which of course is a good thing.
We all want to live out our years and get the most out of them while we do.

But there are also consequences of that. The man who survives a heart
attack today will at least 17 years later need more heart work done
(bypass fixes do not last forever). Not to mention that he may develop
other, non-cardio ailments as well. He may in that extended life-span
develop a bad hip joint and need hip replacement surgery. He could end
up with cataracts and need corneal implants. And of course there is no
guarantee that a man who survives a heart attack will not end up with
some form of cancer in his later years.

An extended lifespan means that more than likely additional medical care
will be needed. Extended lifespans also mean more years on Social Security
that has to be paid out. And it also means more medical costs that will
have to be paid for either in Medicare or other forms of insurance. It
doesn't take a prophet like H.G. Wells to predict that sooner or later
that we are going to have to decide what we will do to pay for all of
that. Unless we are going to completely surrender to the whims and greed
of the insurance companies, we are going to need some governmental
management of all this. And to those who are opposed to any kind of
national health care program (whether it is the one now promulgated or
not) I can only say that without such things will quickly fall apart.
One of the reasons for a federal government, according to our Constitution,
is to "provide for the general welfare" — something that is frequently
forgotten (particularly the word "general"). And I can't help but think
that public health is included in that. I think that needs to be considered
in the creation (or elimination) of any health care system.

One thing that I think we can be sure to see in the coming decades is a
growing medical field. There may be downturns here and there as
additional young people enter the industry, but overall it will grow and
become more and more a force in our culture and our economy. If I were
a young person today I would most likely choose a career in the medical
field. As a friend of mine wittily put it years ago — one thing we'll
always need is bartenders and doctors.

15 thoughts on “A Culture of Health”