Count Dracula (Christopher Lee) once again gets crux-flashed in 1973s Satanic Rites of Dracula. This was the last vampire movie the Lord of Horror made, with Lee saying he thought the movie “fatuous.” Actually it’s not much different than most of his Hammer Film series; and in fact the whole deadly plague thing thrown into this one adds something new. The movie has an itty bit of titty, so Not Suitable For Work. Just in case you would watch a movie called Satanic Rites of Dracula at work anyway. 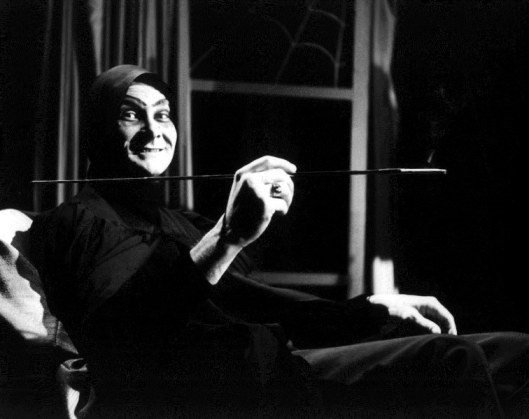 Long before Svengoolie, and even long before Elvira: Mistress of the Dark, there was Sammy Terry and Nightmare Theater. I was just a young kid then. My parents didn’t like horror movies (although my dad did develop a liking for sci-fi movies). Nevertheless they would let us stay up and watch them late at night on weekends. Which is to their credit, as some parents back in the 60s didn’t let their kids watch them.

This of course was long before you could rent movies to supplement regular network television. WTTV (Channel 4 back in those days) was an Indianapolis alternative station. They would program movies, local professional wrestling, reruns of series that had wandered off of the regular networks, as well as a local news program.

There was a strange lure to Nightmare Theater. It was dark, viewed in black and white those days. But anything really frightening about the program was pretty much negated by the camp attitude of Sammy Terry himself — played by and the creation of Robert Carter. He was certainly one of the pioneers in this genre.

And there were certainly a few movies across the years that scared the hell out of me.

The Republic of Bullshit

“I saw you at Starbucks. You are Jean Valjean, are you not?”

“But you look very much like him. And Jean Valjean was a heavy expresso drinker.”

“Regardless, I am not the man of whom you speak.”

“You really do resemble him. And Jean Valjean always ordered the double shot mocha, like you did.”

“I have a feeling that you are.”

“And I have a feeling…that I am not.”